The snowy skies cooperated and cleared to crystal, so naturally, we spent much of evening admiring the lunar eclipse. We crunched down the icy street but soon found there was no better view than the one through the bare Black Locust branches from our back deck.

Dan’s cell phone rang over and over with friends calling to make sure that Declan wouldn’t miss the orange-red sight in the sky. Dec helped me stir hot chocolate on the stove while his dad hooted at and applauded the moon. I ladeled some of the warm mixture into Dec’s orange mug, and he sipped it as he stood on his stepstool, looking up at me. Then, in a moment that was both celestial and Beatles-esque, he said “this world is the one thing money can’t buy.”

Today at 7 p.m. EST, NASA is beaming the Beatles song “Across the Universe” toward Polaris, the North Star. Apparently, the moment is the exact time the song was recorded 40 years ago, and meant to be a “cheerier” greeting to aliens than the usual Morse code we routinely transmit into space. This event is also apparently part of NASA’s 50th anniversary celebration.

According to the Bad Astronomer, Polaris is far from the best star choice if the objective is to greet distant life forms, but it is one of the few stars that large numbers of humans know by name (outside of the sun).

Organizers are encouraging people to listen to the song at the same moment all around the world. There is more information about it here. The event will also be broadcast on NASA TV online.

For today, we’ve put the song at the top of our Cosmic playlist:

P.S. Declan doesn’t believe me that this is a Martian crater because it isn’t red.

For those of you who aren’t keeping up on space news, some neat stuff happened this week.

First, NASA’s space probe Messenger shot back images of planet Mercury that revealed a mysterious crater that scientists are calling “the spider.” I don’t know all of the details, but apparently Mercury and our moon aren’t as similar as once was thought. (I never realized how similar they were until my house became overrun with myriad cardboard and plastic planets – we’re always getting Mercury and the moon mixed up around here.)

And, pictured here is an image posted by The Planetary Society blog of a smiley-face crater on Mars. It was taken by a camera that’s cataloging the surface of the red planet in super high resolution from the Mars Reconnaissance Orbiter.

Declan was already asleep when I found this post tonight. I can’t wait to show it to him in the morning. It looks like one of his drawings. 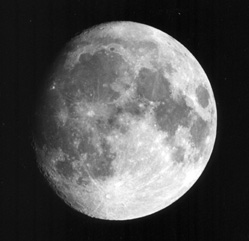 A year ago, if you’d asked me to look up in the sky and tell you which of the distant dots were planets and which ones were stars, I wouldn’t have been able to do it. I’ve had a few wee hour adventures into the farmlands to watch a meteor shower, stared at a comet through a telescope and traced Orion’s Belt and the Big Dipper in the sky with my finger, but that’s the extent of my astronomical prowess.

So much of our world revolves around space now. The other morning, after we watched Declan slip planets from a cardboard solar system in and out of their box Dan asked me, “have we had a day in the last year where we didn’t hear the word Jupiter before noon?” I had to say no.

Our love of Jupiter runs deep. But we have affection for all of the planets, whether they are in books, on mobiles or on television documentaries. At a summer festival last year, friends looked on as Declan cried when Venus vanished behind a cloud.

Tonight, we were out running errands after sunset, and looked up at the waxing Gibbous moon in the darkening blue sky from the Sears parking lot in the bitter cold air. There weren’t any stars visible, but there was one planet, shining brightly right next to the moon. It was so vivid, I guessed it was Venus, but I came home and checked the Sky Calendar, which told me it was Mars. The three of us stood in there, pointing and oohing and making our guesses until we couldn’t stand the cold any longer. (According to that link, there is a “wind child” advisory here.)

If you are fortunate enough to be in warmer climes with clear skies tonight, or have a great North-facing window, be sure to tell Mars hello for us. Dan spent yesterday afternoon at the club, the front door propped open so that people could come in and buy t-shirts or old posters he had on sale. It was kind of a depressing day, with people mostly coming in to gawk, take pictures, or, to his amazement, say “you mean you’re really closing?”

He came home deflated that he hasn’t saved more memorabilia over the years, and that business has been so lousy in this final month. This all happened so quickly, it was impossible to create any real finale for the place. People might have stayed away for fear of getting trapped in the crowds, so there weren’t many crowds. Or they never believed it was really going to happen, thanks to the dubious reporting of The Other Paper, where the only real coverage was the speculation that Dan was bluffing or that the landlord was going to have a change of heart. (Never, I repeat never, trust TOP‘s “facts.”)

Fortunately, I read Space.com almost every day. So yesterday, I found out that last night’s full moon would appear to be the biggest of 2007. Venus and Saturn are also hanging out together in the western sky.

So, here on the realio, trulio (props to Ogden Nash) last weekend of Little Brother’s, we loaded our son in the car at sunset on Saturday night and drove to the country. The sky was electric pink and an old, unmarked mix tape of mine that I unearthed in the club’s basement played Neil Young’s “Long May You Run.” Venus was bright, with the faint Saturn nearby, and fireworks were going off all over the countryside west of town. When the moon peeked over the horizon, it did indeed appear to be huge, streaked with hazy red and orange stripes.

“Is it Jupiter, daddy?” Declan asked.

This is the planet that Dec is both the most fascinated with and the most afraid of. After watching a few specials about it, I must admit that I’m a little scared of Jupiter too.