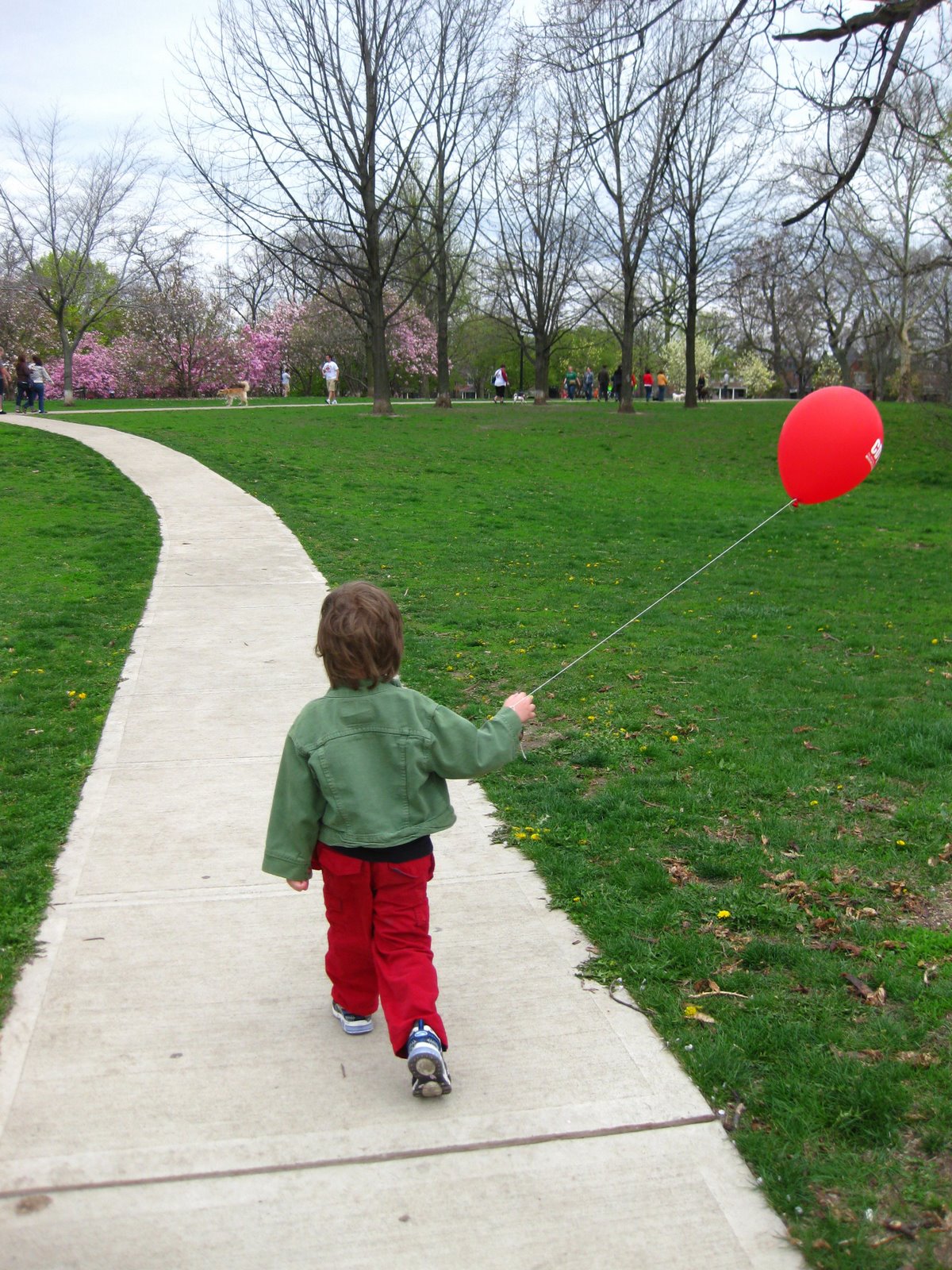 http://vimeo.com/moogaloop.swf?clip_id=4230842&server=vimeo.com&show_title=1&show_byline=1&show_portrait=1&color=00ADEF&fullscreen=1
Walking with a balloon from Tracy on Vimeo.

These are a couple of quiet-ish minutes that I really enjoyed today.

I’m trying to appreciate grace in small things amid the chaos we know as almost four.

This afternoon in Columbus, in front of the Ohio Statehouse just before Michelle and Barack Obama spoke. It’s hard to hear, but “Ain’t No Stopping Us Now” and “Your Love Keeps Lifting Me Higher” are inspiring the moves.

We walked through the fragrant pathways of the Park of Roses at its annual festival for Father’s Day. We usually try and make it there on some uncrowded day when the blooms peak, because there’s something oddly calming, and yet completely decadent about strolling around 11,000 rose bushes.

There are other reasons that I feel connected to the place. My great uncle contributed to the growth of the park for many years before I was born. He was a master surgeon and a rosarian – a President of the American Rose Society for many years. Most will tell you he had a lot in common with the brilliant and thorny flowers that he tended so religiously throughout his life. That generation of my family has passed, but many of the things at the festival seem preserved in their time. The people who conceived of this park knew how to take nature and shape it into a field of fantasy, and they didn’t require computer simulations to do it.

One of the first things we saw was a men’s glee club, where the median age was probably somewhere around 75. The group put on animal noses to ham up “Old MacDonald” quite adorably, especially the exuberant duck. Then they took off their hats and held them over their hearts to sing “God Bless America.” The gentle sincerity of their performance caught me completely off guard. Dan and I both got choked up.

Declan fell asleep soon after the performance, missing out on cool things like this wind-catcher, which I might have purchased if it hadn’t been sixty-odd dollars.

http://www.vimeo.com/moogaloop.swf?clip_id=1181401&server=www.vimeo.com&show_title=1&show_byline=1&show_portrait=1&color=00ADEF&fullscreen=1
In the wind from Tracy on Vimeo.

And of course, being in the city, not everything about the festival is old school. Note the only political campaign on the grounds:

http://vimeo.com/moogaloop.swf?clip_id=381848&server=vimeo.com&fullscreen=1&show_title=1&show_byline=1&show_portrait=1&color=00ADEF
Star Trek & the Fabric of Space Time from Tracy on Vimeo.

For the past few months, courtesy of the DVR, he’s liked to watch the opening sequence of “Star Trek: The Next Generation” and recite what he could along with it. The other day, he started reciting it in the car.

Question I get now: “He likes it because daddy likes Star Trek?”

No, that would be mommy.

[youtube=http://www.youtube.com/watch?v=LaKqejeuVcc]
(Note: this video is longer, and of a higher quality, so it may take some time to load.)

We found this huge book on the Cosmos at Borders a few weeks ago. High atop a display of discount outer space books, Declan asked me to get the “Bero Galaxy book.” For those of you who, like me (before I had a space-obsessed child), would have no idea what that might mean – it’s a book with a picture of the Sombrero Galaxy on its cover. Filled with huge images taken by the Hubble and Spitzer space telescopes, as well as various other spacecrafts, he was excited to see things he loves, like the Galilean moons of Jupiter, in such detail.

And he stunned me a bit by identifying not only the things I knew he knew, but by saying things like “oh, these are the train wrecks,” when I turned to the page that showed distant galaxies colliding with one another. He can also identify many planets and moons in our solar system by their surfaces – the volcanoes on Mars, the pock-marks of Mercury – and the long arms and glowing cores of several different galaxies. His father and I are confounded by this on pretty much a daily basis, and grateful to be learning that we are even tinier specks in the universe than we ever thought possible.

“That is a really good space book,” he told me confidently after we spent 10 minutes on the floor of the bookstore, flipping through and talking about the pictures.

His favorite thing to watch lately has been the Nova special The Elegant Universe, about string theory. I have watched this with him at least two or three times now and much flies over my head. Declan likes me to watch it with him and explains some of the basics to me: “It’s everything, mommy. It’s everything.”

A few days ago, a young pregnant woman flirted with Declan in the grocery line. He peered around the shopping cart at her, sweet and shy. She waved at him and said “Hi there! How old are you?”

This is a question people ask him all the time, but he doesn’t seem all that interested in answering or even knowing the answer.

I leaned over to him and said, “can you tell her how old you are? Do you know you are two? Can you say ‘I’m two?'”

He looked right at her and said “It’s an elegant universe.”

She looked at me curiously and I interpreted. “He said ‘it’s an elegant universe.'”

She looked pleased and surprised as she touched her belly.

“He has a lot of answers about the big things,” I offered. “Details like his age – not so much.”

“Who needs to know they’re two when they know that?” she said, then she leaned down and looked right at him. “I hope you keep thinking about the big things and the elegant universe for a long, long time. I hope you don’t forget them when you get older.”