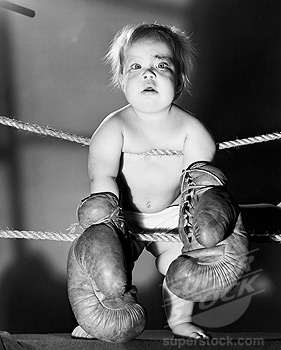 We spent some time on the playground today after camp – a common ritual for us. Declan spent much of the time playing spirited games with a group of kids, during which a crater in the dirt became a massive, sucking black hole they had to escape from (Dec’s idea) which became a giant’s hand that they had to escape from (another boy’s idea) because the giant would throw them into the black hole.

After most of the kids were out of mortal peril, Declan approached an older, bigger boy who was mid-play and started talking to him, putting his hands on the toy he was using. The boy seemed to have a problem with this. After a few words of protest, he reached over and popped Dec on the forehead with a downward fist.

“Why did you do that?” he said, and retreated to another part of the playground as I started to swoop in, as did the other boy’s mommy. I saw Dec’s lip quiver as he walked away, blinking back tears. I asked if he was okay and he fell silent, running his fingers over the chain-link fence. After a moment or two of not responding to me, or to the other mom’s questions about whether or not he was okay, he turned to me, and asked, quietly:

“Why? Why would he do that?” he asked, clearly hurt by my answer.

“I don’t know, honey… I think he was having a hard time finding his words. But I think it’s good you walked away. No one should ever hurt you. You can say ‘don’t do that’ or ‘stop.’ Or get a grown-up to help you. You have the right to keep your body safe.”

He didn’t want to talk to the other boy about how he felt, or say anything much at all to anyone after that. The other boy and his mother left. Dec walked alone in swervy lines and ignored a littler boy who came up to him and asked “do you need someone to play with?” the kind of invitation that Dec is usually receptive to. Finally, he dragged me by my hand, with a “let’s go mom.” And so we did.

We went down the street to get some lunch, coincidentally, at the restaurant where the other boy and his mom had also retreated. Declan pointed this out to me without any hint of fear or animosity, just another one of those “wow, that person likes something I like/does something I do” discoveries, which seem to be such an endless source of fascination for him lately.

I’m kind of glad that his reaction after his initial hurt feelings was in the spectrum of “maybe this didn’t have to do with me.” It’s not that I want him to be naive or easy to blindside, but I do think that when we believe that the world – or particular people – are out to get us, and we behave as though we believe that, we invite discord and bring unhappiness upon ourselves. We turn another person’s bad day or their poor communication skills or their lack of confidence or their aversion to orange shirts into something that’s entirely about us when none, or very little of it, actually is. On the whole, I think I’ve seen more damage done in reaction to perceived harms than I have in premeditated ones, at least in my personal experience.

The first year of preschool has taught me a lot. I know and care about and have tried to understand the behavior of a lot of young children. Six months ago, I think I would have had a hard time seeing another kid hit mine without wanting to throw that boy or girl over the fence. Today, I honestly felt hurt for both boys immediately, and for the other mom, who had been in the middle of sharing a bagel with me and telling me about some truly hard things that had been happening in their family when it happened. With so many people around, I hated that she might feel judged. (Moms judging other moms harshly or second-guessing their parenting abilities – I know it’s common fodder for the blogosphere, but I may have to take a crack at it sometime. It makes me so uncomfortable.)

Tonight, Declan amazed me just before he went to sleep, when he suddenly cracked open about his whole day. While the incident left him confused, he was more upset over an argument he had with a friend at camp that he’s known for some time.

“He doesn’t know how to use words, he just yells at me when he doesn’t like something. Today we were just arguing and arguing,” he told me. “Why do people get mad when they have different ideas? Why do people just want to be left alone sometimes?”

I reminded him about the little boy who asked him to play when he was feeling bad today, and how he didn’t really respond. I told him that sometimes people need time to figure out what they are feeling. Or that maybe they are feeling bad because of something we have no idea about – like they pinched their finger on the tool bench or had a nightmare the night before or are coming down with a bad case of diarrhea and aren’t feeling so good.

To which he responded: “why do people get diarrhea if they eat snow?”

We also watched this today and laughed a whole lot.

3 thoughts on “Baby’s first punch in the head”