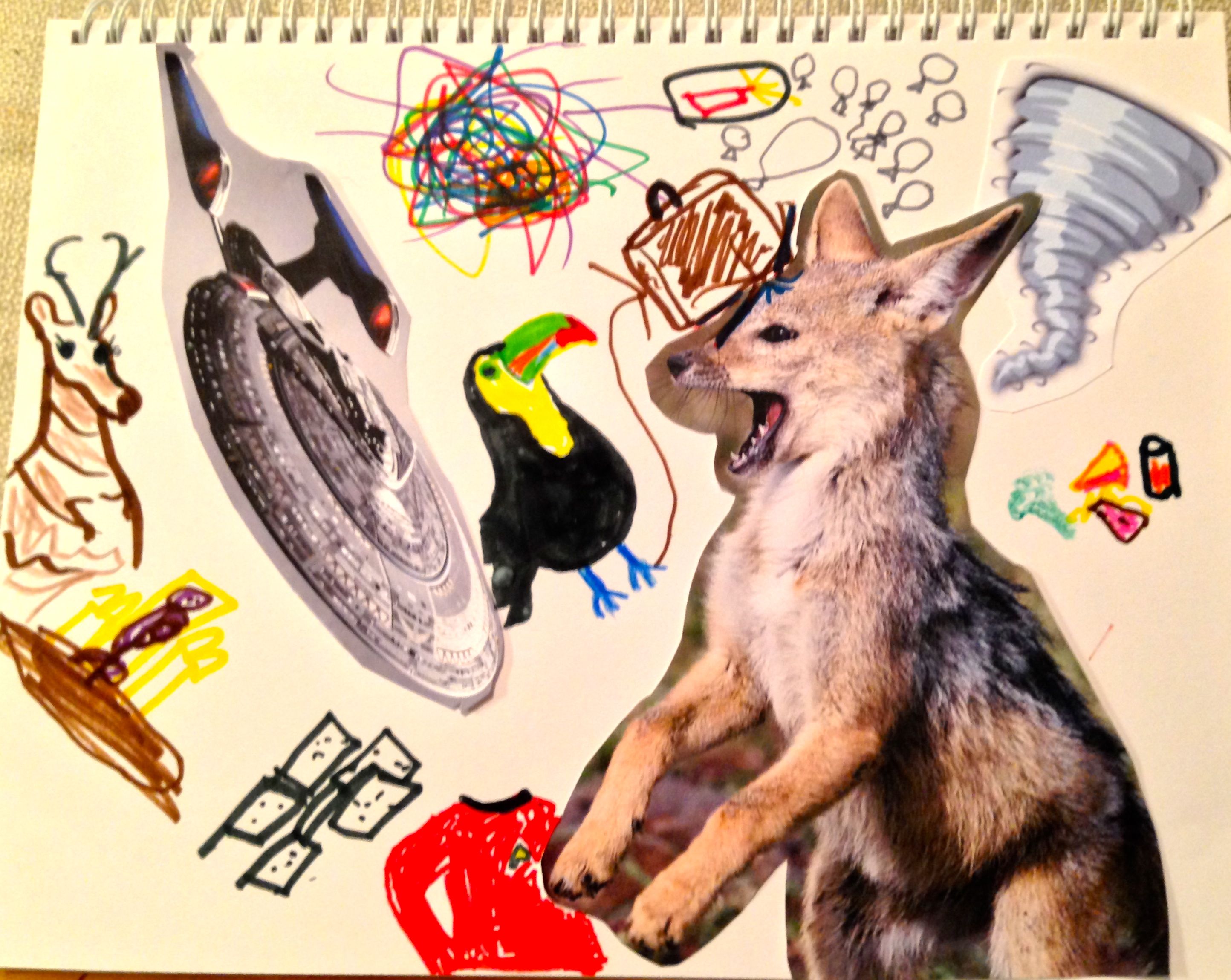 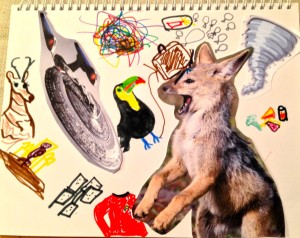 By Declan and his mom

Declan and I wrote this together by hand, passing the notebook back and forth, each taking a turn at contributing a line or two. He’s excited to share it. We hope you like it.

Once upon a time, there was a jackal named Juniper, and he loved to bark at birds.

Alfonso Frederico la Vesta bopped Juniper on the head with his briefcase, which exploded into 100,000 pieces of glitter and 600 silver balloons.

Juniper hadn’t a ghost of an idea what was happening. He ran away.

The balloons followed him. The glitter swirled into a massive shiny funnel cloud.

Juniper landed in a strange place that had a chocolate marsh and trees that were made of staple guns and jigsaws.  They started to grow rapidly as the jackal came down.

Out of nowhere, a glowy castle emerged from the chocolate marsh. It had a moat that was made of liquid rainbow Skittles™. If you tried to swim across, the castle would catapult TNT jawbreakers, which exploded in a hot gooey mess. The castle seemed to enjoy targeting a particularly cranky bunny rabbit that was practicing ballet on the other side of the moat.

Juniper fell onto his bottom in awe, his tongue hanging out the side of his mouth. His eyes rolled back into his head for a moment.

A drawbridge made of Jolly Rancher™ candy dropped in front of Juniper that seemed to be just for him. As he walked into the castle, a giant Burple* monster with polka dots — which actually turned out to be UFO warp engines that were friendly — appeared.

One of the UFOs approached Juniper. The warp engine smiled at him, stuck out its tongue and licked the jackal on the nose, giving him the ability to make the moment become marshmallows. These marshmallows had tritanium in them, which made you fit and healthy.

“Wow, the present moment sure is sticky,” said Juniper. “But I feel like a million pronghorn bucks that have eaten unicorn milk that was impregnated by an interdimensional creature.**  Thanks!!!”

And so he went into the 2, 248th dimension, where everything flew by pooping rainbows from dimension zero.

“I feel kind of hungry for a pork chop,” thought Juniper.

Just at that moment, a cardboard foot flew into his mouth, but it tasted like lemonade.

Then Willy Wonka™ appeared and handed Juniper an infinite, updated version of his meal gum. He chomped it in his jaws and tasted the most delicious pork chop with applesauce that he had ever tasted. There was also steamed broccoli, a glass of high-pulp, fresh squeezed, not-from-concentrate orange juice and rhubarb pie with vanilla ice cream.  He turned the shape of each food, but quickly sprang back into jackal form.

He decided to make a video/life portal to the Cookieverse™. He was so full of rhubarb pie, having just been rhubarb pie, that he simply gazed at the cookies lovingly.

Reluctantly (although he knew he could come back), he went out of there and onto television.

Whoosh! Juniper felt his body flicker. Suddenly he was transported onto the bridge of the USS Enterprise-E, next to Lieutenant Commander Data. He blinked and looked down and saw that he was wearing a red Starfleet shirt from the original series.  They were searching for the Borg.

“I wonder if this means I am nothing more than an incidental character – an infinitesimal membrane – in the universe…?” thought Juniper.

* A color that only exists in alternate dimensions.

** The unicorn milk is what was impregnated here, not the unicorn.

The collage/illustration is also a TZT & Declan collaboration.

P.S. Declan was very enthusiastic about writing this story, so please feel free to share it or leave him a comment if you are at all inclined.

5 thoughts on “An interdimensional mother-son story”