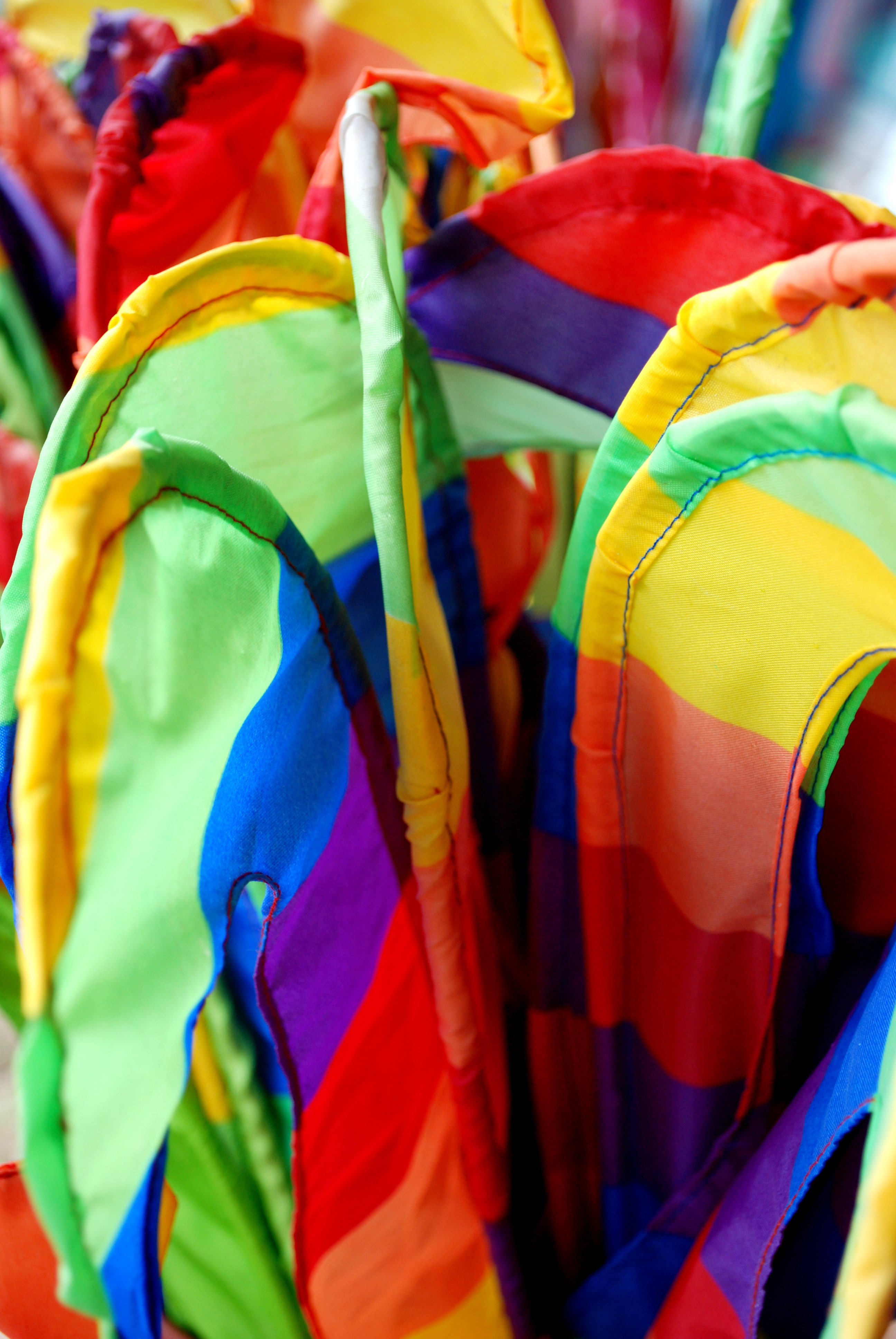 Have you seen this wandering tribe? Since they are a caravan, I assume they are wandering and not still standing on this golf course lined with rainbow flags, but I’m not sure. Who wouldn’t follow a love-preaching guy with this protective jewelry and waistline anywhere that he asked you to go?

Like so many things from the 1980s, this is something I never knew I wanted to remember. The song and the video are awesome in completely different ways — it’s like an archeological dig that’s turned up sweatbands, day-glo fingerless gloves and the cartoonish international archetypes that early music videos embraced so shamelessly.

I’m hopeful that the Isleys have set the crowd straight by now, because the shoulder-padded huddled masses’ sense of rhythm is atrocious. If I find them, I’m bringing a set of klavés.

P.S.S. Watch the whole thing. It out-mesmerizes the Trolololo dude.

I never had my own pair of roller skates with hand-made pink baby pom-pons draped over the laces. I don’t remember wanting them. The scuffed gray rentals with faded red stoppers on the toes were good enough. United Skates of America (USA) was a dim place, and the nuclear orange, black-lit flames of the “Disco Inferno” balcony where couples would go and look down at the skaters were far more mesmerizing than anything you could wear on your feet.

We were a displaced, split-up family, displacing our cousins out of having their own bedrooms for a summer while mom looked for a job and a place where she, my brother and I could live in Ohio. The chance to live with our cousins seemed like a dream come true for my brother and I, but it was as hard as it was fun. We became a house of five kids and three adults who sang a lot of “We Are Family” by Sister Sledge and “Boogie Oogie Oogie” by a Taste of Honey in the living room. We drew chest hair on brown grocery bags, wore them like tank tops and danced to “Macho Man” by the Village People for our parents, who laughed hysterically with their hands over their faces. We all fought about stupid things. My mom left my brother and I there for a couple of weeks while she packed up our childhood house on the Jersey shore because she didn’t think we should see it empty. I got in trouble for putting my fingers too close to the electric egg beater when my aunt made a cake. We made massive forts out of bar stools and blankets. I turned 9. We put shoes on our knees and sang “Short People” by Randy Newman (really, what kid didn’t in 1979?).

We got to go roller skating at USA, where it seemed like nighttime no matter what time it actually was. We did laps together, holding hands in a line when Michael Jackson’s “Rock With You” came on. We were too young to care about boyfriends and girlfriends so when couples ironically paired off under the disco ball lights during “She’s Out of My Life” my cousins and I skated into the island in the middle of the rink and pretended to sob along with Michael. My aunt or uncle bought “Off the Wall” on vinyl and it gave us a new crop of summer anthems to dance to until my mom started a job and found us a brick house with a lime green master bedroom and a neighbor dog named Thor.

My brother had the jacket from the “Beat It” video and he made awesome, tough-guy faces when he wore it. I remember MTV (and therefore my girlfriends and I being 13 or so) treating the time Michael Jackson’s hair caught on fire during a video shoot like the most important breaking news story of our time. I remember watching him moonwalk for the first time on the Motown tribute show and feeling like it looked way more magical than anything Doug Henning had ever mustered. I joined a record club without my mom’s permission soon after that so I could have the 4-record 25 years of Motown collection and boy, I got in some big time trouble but boy, do I still love that music.

I remember thinking “We Are the World” meant that celebrities were good, generous people. And seeing the weird Captain EO movie at Epcot when I was 16 and at Disneyworld for the first time. And pretending that “Man in the Mirror” would inspire my friends and I to march on Washington in college. And thinking that the King of Pop was tragic. And thinking he was crazy. That he was a jerk when I read about how he bought the rights to the Beatles catalog out from under Paul McCartney. And how much I loved his face on the cover of “Off the Wall” and wished that he did too.

In the mid-90s, I was the only female among a bunch of reporters that showed up at a strip bar where his sister LaToya lip-synched to a recording of herself, singing his hits and some kind of Casio-driven medley of Edith Piaf songs. The entire audience was press because it was also the night of the NCAA finals, except for some kids in the parking lot who begged the police officers there to get an autograph for them. The cops obliged, which was kind of dear but also weird. Being that one degree from Michael seemed like the real thrill the kids were seeking.

I was surprised how sad I felt when I heard about MJ’s untimely demise today. I had just watched my son spend the afternoon with his cousins – hugging, swimming, laughing hysterically, sneaking candy and having important arguments over whether “good guy” balls made out of wool felt should be flushed down a fake toilet (also made of wool felt, and actually a bowl) or not. I drove him home just before a chain of thunderstorms hit the house, hugged his dad, cranked up “I Wanna Rock With You,” on the stereo and danced with them the way I did when I had fake chest hair in my cousins’ living room.

What do your memories look like when you see them through the Michael Jackson filter?