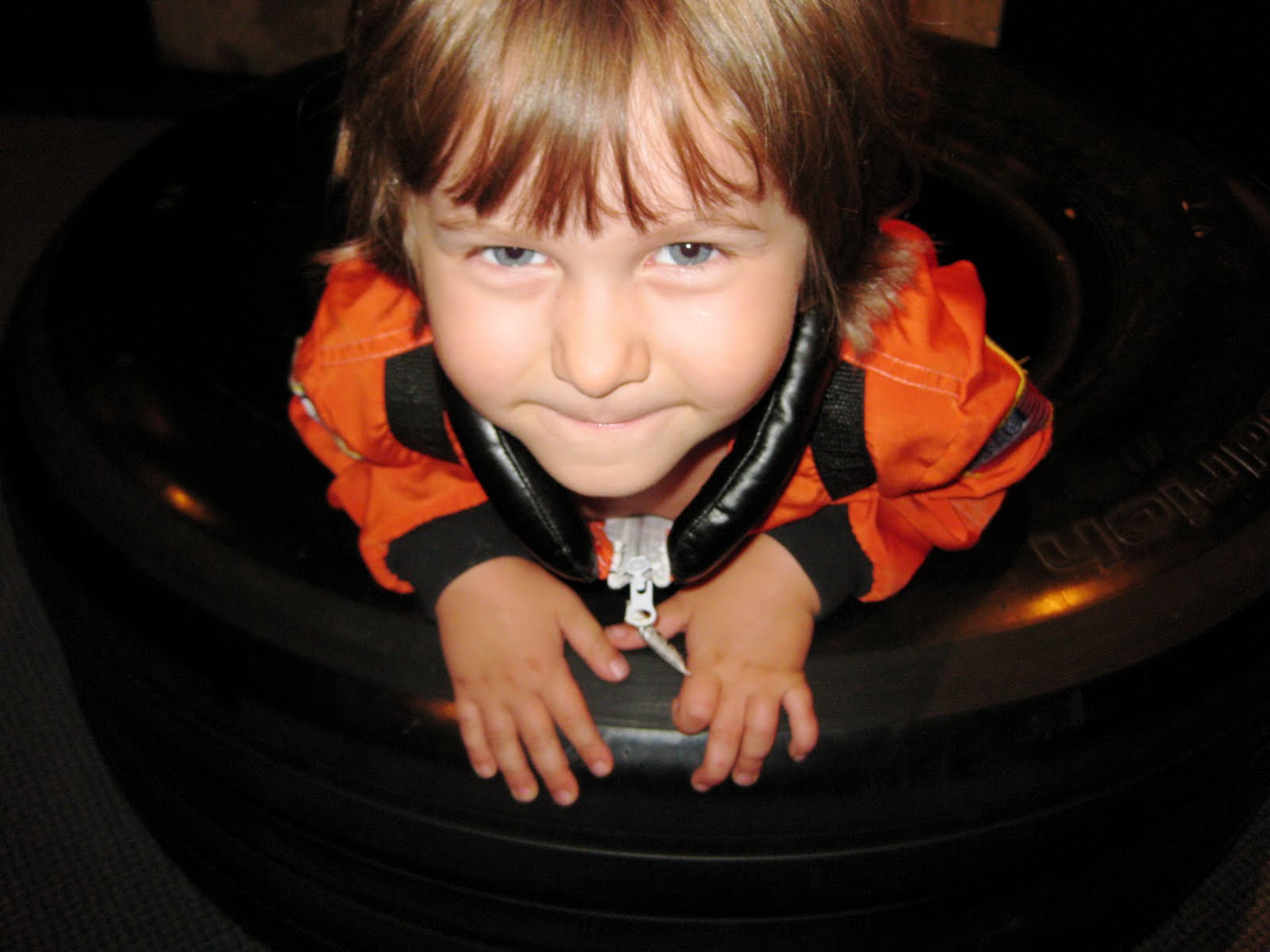 This is a tire that was used on the front landing gear of the Space Shuttle Endeavor on a 1994 mission. I saw at least seven or eight kids of multiple ages do some variation of this kind of play (at the Neil Armstrong Air and Space Museum in Wapakoneta).

What a cool way to get closer to space.

It’s been said in recent years that NASA has lost its luster with Americans, or somehow doesn’t capture or inspire the public imagination the way that it used to. The kabillion** people who showed up for the open house at Plum Brook Station this weekend suggested otherwise. It was the first time the place had been opened to the public in 10 years or so, and likely the only time it will be for another 10 years.

We went, as part of our quest to connect Declan with a scientist or two in his beloved space field this summer. (Next year, I want to find a way to go to this.)

Here he is, in the control room of one of the test facilities. The space shuttle had just lifted off for it’s mission to take a Japanese space lab to the International Space Station and rescue its toilet. We were able to watch it soar into the heavens on NASA TV. And Declan was able to pretend to fill a test tank with cryogenic liquid on the computer. (Or something like that.)

That is the lid to a nearly 200-foot deep chamber where they’ve tested rockets. It hasn’t been in use for a while, but it’s impressive. And kind of scary. (To me, more than to Declan).

Declan wore his “Galaxies fade away, all stars merge” shirt and carried a small space book around with him. His obvious interest drew a few smiles and comments from the very friendly staff. There were so many of them, he was a bit intimidated.

Here we are, in the world’s largest space environment simulation chamber, where a bunch of the components of Orion will be tested before they head moonward.

Given his longtime adulation of the liquid nitrogen geysers on Triton, this cryogenic demonstration was a particular thrill. Purple flowers were frozen and smashed, a balloon was deflated in the bucket that re-inflated as soon as it was taken out, and Declan got to touch a ball that was smoking cold from liquid nitrogen.

He also got to look inside of a manned maneuvering unit and took his own picture of a Robonaut. I have to hand it to the folks at NASA – there are a lot of places that purport to educate and entertain people of every age, but few succeed. The staff seemed genuinely interested in answering questions and offering information to its visitors, be they 3 or 73. (And I’m a tough critic.)

The whole Plum Creek site is so big, they bused us from one part of the facility to another. I wish that we had made arrangements to stay overnight and gone to the open house on both days. I didn’t realize how vast of a place it was, and how much there was to see. If we’d had more downtime, maybe Dec would have gotten comfortable enough to chat with a staff member or two. I suppose if space is still an interest of his when he’s (gasp) thirteen, we’ll know better next time… in 2018.

**Not an official NASA estimate.