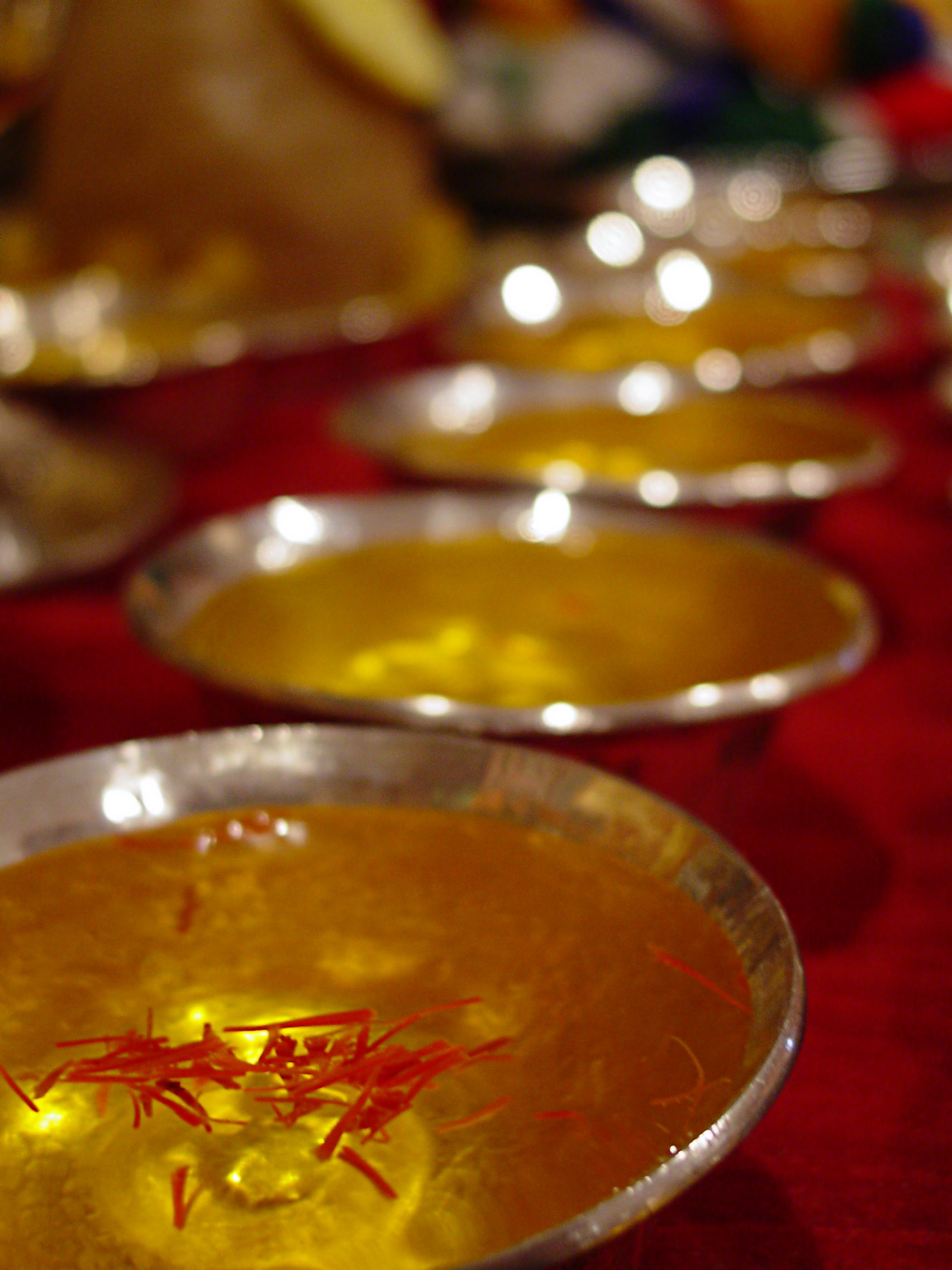 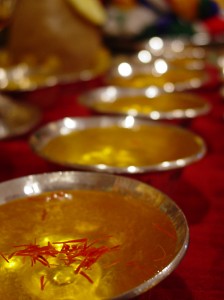 I’m really not a good Buddhist, or technically even actually a Buddhist. I have sung the Refuge prayer in spirit dozens of times but never taken it in formal ceremony. I really don’t have any meditation practice other than a long history with yoga, childhood theater classes that taught me a lot about visualization and a propensity to chant Om Mani Padme Hum while I fold the laundry.

Right around the time that I got pregnant, I started spending time at a Tibetan Buddhist center (Kagyu tradition). This was partly because I had written about an extensive exhibition of Buddhist meditational art called The Circle of Bliss, went to hear Robert Thurman speak and caught the desire to know more. It was also partly because of the gratitude that I felt for an AA meeting held at a local temple that did – and still does, just by the fact it exists – help some people who need that program but feel put off by it because it can seem so Christian-centric. Twelve-steppers aren’t supposed to promote whichever “higher power” they believe in, but I hear that it can be hard to find a meeting where Jesus isn’t name-checked. And that can be a major obstacle for people with religious baggage.

But mostly it was because as soon as I began to tell people I was pregnant, these questions of faith started to come up. What would I raise my child to believe? It was suggested that this was something that I needed to answer as soon as I could. It was also suggested that I had to pick something because wishy-washy in-betweenyness would inflict moral ambiguity on my child. I was raised Christian (baptized Episcopalian but confirmed Presbyterian) but open to all kinds of possibilities. Once, during the Shirley MacLaine vein of the 1980s, my dad told me that a transchanneler told him that he and I were sisters in a past life in the Southern U.S. and that we were very good friends then indeed. He also went to a stark and classic New England Episcopal church regularly. And he had my astrological charts done when I was born.

My best friend’s father was a born-again minister and try as I may to heal my mosquito bites by uttering a lot of Amens and Praise the Lords and Hallelujahs and trying to open my heart during one of his faith-healing Bible studies I could not get it to work. But my Presbyterian confirmation as a 14-year-old followed a year of questioning and analysis at a church that had me go and sit through Roman Catholic and Greek Orthodox mass and African American Baptist services so that I might have a decent idea about how diverse Christianity really is. I loved that my minister wasn’t afraid to give sermons about the Cold War or racism or abortion (there was, and still is, a NARAL chapter in that church). I was asked to become a deacon, but that minister left and I lost my closeness to the church and the faith. I am just more comfortable in faith when I’m invited by its envoys to question it.

I’m not the kind of Christian girl who ran screaming from her church thinking that having no religion would make me intellectually superior or that Eastern religions would have all of the answers. When I started going to Dharma talks and public talks by Buddhist teachers, mostly what I found was a way of thinking about the world that is much more Christ-like, as I understand it, than what I find in a lot of churches now. To try and see my worst enemy with the compassion of 10,000 mothers, to dedicate my actions to the benefit of all beings – these things have the spirit I think of when I think of Jesus. And here in the west, anyway, we have the luxury of contemplating Buddha without watching him turn into a political football. Jesus, on the other hand, gets punted and kicked and used for touchdowns and spiked in Washington DC all the time. Most Christian organizations and a lot of self-professed Christians make me feel alienated from the faith. Still, there is no question that I will raise my son to understand that Christianity is part of his heritage and give him the opportunity to explore it as a faith if he so chooses.

Meanwhile, there really isn’t a space for kids in the Buddhist center that I visit. They’ve been kind enough to put speakers in the basement that have enabled me and a handful of other parents to listen to dharma talks while our little ones babble around us and we all worry that they’ll be too loud. But the most popular event there every week is Shi’nay (a silent) meditation, and people – including some parents trying to get that hour of silence – don’t want that kid noise adding to the roars from the nearby freeway and the barking dog neighbors, even if it’s just creeping through the floorboards of the temple from our subterranean space.

A very good yoga teacher of mine taught me that quiet meditation is something you work to do amidst the clamor – that you can’t control your environment, but you can learn to control your response to an environment. I try to stem my resentment that childcare of any form never felt like a consideration at the center. When I’m there, I generally want my son with me. I can’t let go of my expectations that kids are part of the spiritual package. I’m not comfortable being there when it seems he’s not welcome or might raise hackles if he acts as what he is – a child – without feeling like he might be resented for it. So I’ve never sat Shi’nay. And I’ve never felt like I could fully embrace the practice. It seems like many Westerners come into Buddhism in such a solitary way, or in ways that so firmly reject anything that reminds them of their Judeo-Christian upbringing, that a Sangha (community) can feel like it’s being built out of pebbles instead of bricks.

So a couple of weeks ago, when a friend of mine who is deeply involved with Zen Buddhism came to town, I went to a Zen meditation with her. I had no preconceived notions about taking Declan because the group is very small and rents a room in a church, and while there are several differences between Shi’nay and Zen meditation, there are thin
gs that are the same. During that 5o minutes of silence I employed just about every way to clear my mind that I know. I turned numbers into clouds and blew them away. I saw their outlines in the sand and brought in waves to clear them. I burned them as sticks, I wiped them off like chalk, I flicked them off the table like peas. (I guess I used numbers because someone there told me to count to eight to clear my mind.) And I understood something new about the benefits of finding silence, but I found Zen’s coolness a little less cozy than Tibetan Buddhism.

And so, much as in the days when my dad and I were a couple of southern belles, I find myself returning to the laundry.

2 thoughts on “A place to be silent”